Bob Dylan Says He Contains Multitudes; Our Book Says That You Do Too 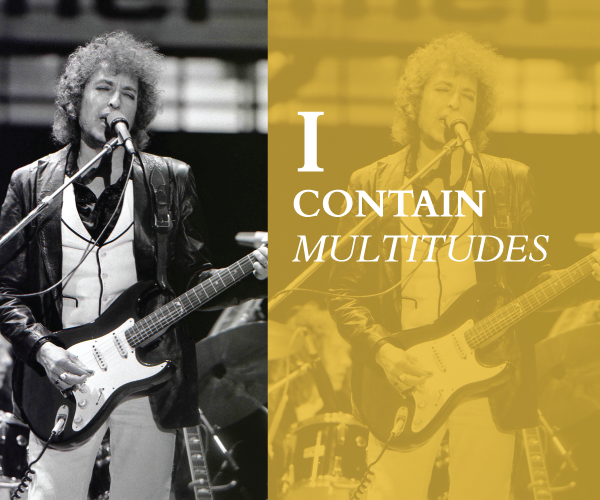 Bob Dylan’s new song, “I Contain Multitudes,” is directly relevant and on point to Your Symphony of Selves, our new book on healthy multiplicity—“mental health is being in the right mind at the right time”—coming out August 4th: Find on Amazon

We were fortunate to be able to include a reference to “I Contain Multitudes” in the book, as the song was available just in time earlier this year. In the book itself we spend some time looking at Dylan and healthy multiplicity in the context of the biographical musical drama I’m Not There, where he is played by 6 different actors, including Cate Blanchett.

Dylan’s work is rarely easy to directly interpret, and he has famously eschewed attempts to put the meaning of his lyrics and songs in a box. In his Nobel Prize acceptance speech, he wrote:

“I don’t have to know what a song means. I’ve written all kinds of things into my songs. And I’m not going to worry about it – what it all means.

But one thing that we do know is that the title of the song is taken from the famous Walt Whitman “Song of Myself, 51”:

“Do I contradict myself?

Very well than I contradict myself,

(I am large, I contain multitudes.)

Second, as always with Dylan, whether or not anyone will ever know what it all means, there are many cultural references worth exploring. The lyrics are freely available online, and you can see them here in the comments: view comments

From our perspective, having one of our culture’s greatest heroes directly pointing to his own multitudes — his own symphony of selves — is a lovely reaffirmation of the value of this perspective, one that Dylan learned to integrate long ago. And has learned not just to work with these ideas, but to incorporate them on the path of becoming a Nobel Prize Winning rock ‘n’ roll genius and poet of the greatest magnitude. (If you haven’t heard his Nobel Prize speech, put aside a half hour and give it a deep solo focus listen. You will not regret it, I promise you.)

Put differently, it’s clear to us from the many references and overall arc of the song that Mr. Bob Dylan has been thinking about multiplicity and questioning the Single Self Assumption in his own way for quite a while now. Always on the forefront of ideas and culture, we think he’s heading exactly the right way with this.

Interested in the idea of healthy selves? Order Your Symphony of Selves today.