What Does Science Itself Say About the Benefits of the Bounce? 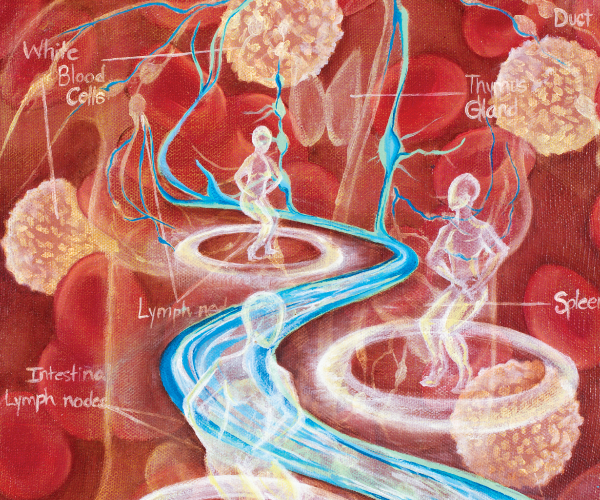 We sometimes get asked what science and the medical community have to say about the benefits of the Bounce, beyond any hype. To get to the answer, let’s begin with a short excerpt from The Bounce (2020):

Very importantly, much of the research we’ll present on why exercising benefits everything from mood to weight loss isn’t necessarily specific to rebound exercise. But the research overwhelmingly shows that exercise that provides a combination of cardio activity, strength training, and balance training benefits just about everyone. Well, that’s just what bouncing does best: combine these three training modalities in a unique fun way that few other exercises can match.

Another thing bouncing does really well is boost your immune system, which we’ll turn to shortly.) There is also rebounding-specific research that has been done over the years— including an early NASA study and a few recent studies—with strong positive results. On a personal level, your two authors have found rebounding to be highly effective. But instead of just taking our word for it, we want you to consider the research we’ll present, the stories we’ll tell (our own stories, as well as the stories of friends and correspondents), and the ideas we’ll put forth—and then decide for yourself….

Science is discovering more and more that exercise is crucial in treating and allowing people to live with chronic conditions and disease. The old way of thinking—that bed rest is the best way to heal most things—no longer holds. In fact, the more sedentary you become, especially when your health is compromised, the more your condition is likely to become worse…sometimes much worse. This doesn’t mean, of course, that you should expect to run a marathon when you have terrible leg pain. What studies do show, however, is that what is most beneficial is combining movement, moderate to intense cardio, and strength training. In our experience, rebounding is terrific at doing just that.”

There are a few important takeaways here. The first an most important is an obvious, intuitive point:

For someone who has studied formal logic, this is not a very impressive syllogism, but it makes a general, but generally valid, point: regular movement and exercise are absolutely vital to long-term health. If you can find something—anything—that you can and will do regularly, then it will regularly benefit you. If you already have one or more sets of physical movement modalities that you do as an adult, then more power to you. But a lot of people don’t move as much as they should, or could use a boost, and there’s no question that at that rough level of analysis—if exercise-and-movement qua exercise-and- movement are good for you, and rebounding does provide this—then science and the medical community are in favor of the Bounce, even if they’ve not thought much about it.

If they have thought much about it, they may be aware of the American Academy of Pediatrics general recommendation against larger outdoor rebounders (see Joy Daniels blog on the Bounce for kids), or they may think of rebounders as mainly being a therapeutic tool available in some rehabilitation centers.

For the most part, then, that leaves it to us to look at existing rebound exercise specific scientific studies. The picture above shows a table from my 2004 book, On The Rebound, in which I gathered together and summarized all of the existing research on the bounce that had ever been done up until that point.

When we began serious work on The Bounce, Joy and I did not try to replicate that feat. I have kept my eye on it, of course, but inevitably the studies that are done have a very small “n” or number of participants, and also inevitably, the research is sponsored by one of the companies that makes rebounders. While this doesn’t mean that the results are invalid, it does mean that all of their specific conclusions are somewhat suspect. 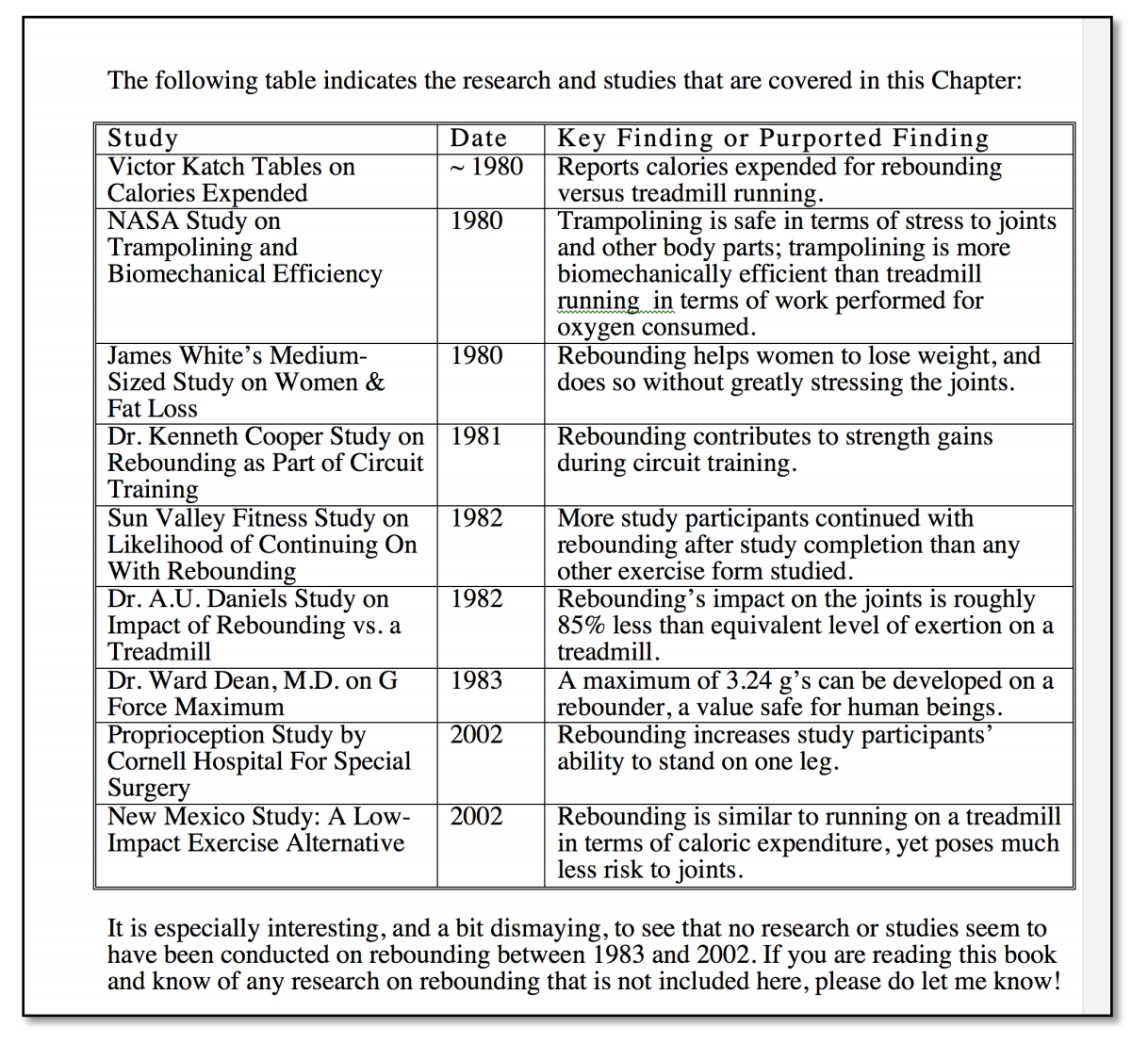 What we need—what we don’t have yet, but one day hope to pull off—is a Bounce Lab where rigorous studies are undertaken or overseen elsewhere. Imagine, then, that we’re somehow past the pandemic, and we can get older folks in various settings—whether at home or in assisted living facilities or other institutions—to participate in funded studies with robust numbers of participants (at least 40 to 200 people if possible) looking at these questions:

Right now, though, if you ask me a question like this one—“Does bouncing provide as good a bone density regimen as either walking or swimming?”—I’m going to say not only do I not know the answer, but that no one does. Yes, we can do a lot of inductive reasoning. With regard to health, for example, I know that when I started daily bouncing 18 years ago, I went from someone who got sick quite a bit compared to most people to someone who almost never got sick. In theory, it’s because the additional lymph movement that I undertook every single day empowered my immune system to enable me to generally resist illness of different kinds.

I really feel that’s true. And it makes sense. Al Carter laid it out, in its big outlines, forty years ago. But I also feel that it’s very likely that nobody knows for sure whether the mechanics of the bounce (all the stuff about “one way vales opening” and gravitational differential and pressure gradients) actually makes a difference or not, especially in comparison to other types of exercise. I’d like to know the answer, yes, but has anyone spent the kind of money you’d need to scientifically arrive at a valid and accurate answer? Almost certainly not.

Here’s the really good news: generally but accurately speaking, it doesn’t matter one hoot! That’s right. All that matters is that if we regularly move on a rebounder, we regularly get a whole slew of benefits that are obvious, immediate, and intuitive. We know we can get our heart rate up as high as we want by running, bouncing intensely, or using weights, and we know that it makes us feel good to move. We don’t really need to know a whole lot more than that to enjoy the heck out of the Bounce.

So, again, yes, it would be nice to know the science, and maybe BounceLabs.coms will be a reality some day. In the meantime, just find a way to talk yourself into doing up to 45 minutes a day, pretty much every day. Fit it in watching TV, talking on the phone, or like me, listening to music. Or watch a class or go to Bellicon Home.

As long as you move, you benefit. That’s the real, very pragmatic, down home science that’s at the core of it all. The rest of the knowledge may come, but compared to finding a way to get on your rebounder daily, to really have a Daily Bounce Practice, it’s in the decimal places.

Put differently, Bounding Virtue is its Own Reward. It’s fun, it’s simple, it’s easy, and it works. What more could you ask for? Oops…now we’re in the realm of a different science, psychology, and for that I turn you to my other book, Your Symphony of Selves, and pretty soon I’ll write a piece here about how to construct a marvelous new you, a self that loves bouncing. Til then! 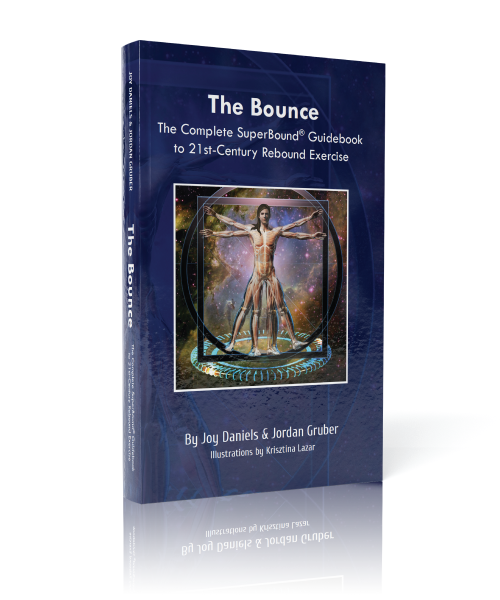 Subscribe to get a sneak peek of my new book, The Bounce.